In 25 years of political life, Betty Bloomer Ford did not expect to become First Lady. As wife of Representative Gerald R. Ford, she looked forward to his retirement and more time together. In late 1973 his selection as Vice President was a surprise to her. She was just becoming accustomed to their new roles when he became President upon Mr. Nixon's resignation in August 1974.

Born Elizabeth Anne Bloomer in Chicago, she grew up in Grand Rapids, Michigan, and graduated from high school there. She studied modern dance at Bennington College in Vermont, decided to make it a career, and became a member of Martha Graham's noted concert group in New York City, supporting herself as a fashion model for the John Robert Powers firm.

Close ties with her family and her home town took her back to Grand Rapids, where she became fashion coordinator for a department store. She also organized her own dance group and taught dance to handicapped children.

Her first marriage, at age 24, ended in divorce five years later on the grounds of incompatibility. Not long afterward she began dating Jerry Ford, football hero, graduate of the University of Michigan and Yale Law School, and soon a candidate for Congress. They were married during the 1948 campaign; he won his election; and the Fords lived in the Washington area for nearly three decades thereafter.

Their four children--Michael, Jack, Steven, and Susan--were born in the next ten years. As her husband's political career became more demanding, Betty Ford found herself shouldering many of the family responsibilities. She supervised the home, did the cooking, undertook volunteer work, and took part in the activities of "House wives" and "Senate wives" for Congressional and Republican clubs. In addition, she was an effective campaigner for her husband. 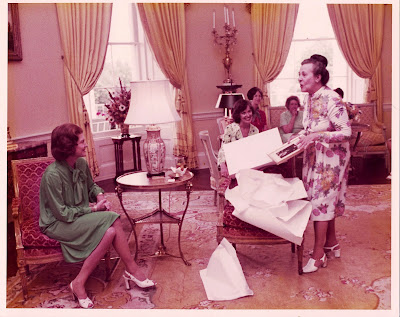 Betty Ford faced her new life as First Lady with dignity and serenity. She accepted it as a challenge. "I like challenges very much," she said. She had the self-confidence to express herself with humor and forthrightness whether speaking to friends or to the public. Forced to undergo radical surgery for breast cancer in 1974, she reassured many troubled women by discussing her ordeal openly. She explained that "maybe if I as First Lady could talk about it candidly and without embarrassment, many other people would be able to as well." As soon as possible, she resumed her duties as hostess at the Executive Mansion and her role as a public-spirited citizen. She did not hesitate to state her views on controversial issues such as the Equal Rights Amendment, which she strongly supported.

From their home in California, she was equally frank about her successful battle against dependency on drugs and alcohol. She helped establish the Betty Ford Center for treatment of this problem at the Eisenhower Medical Center in Rancho Mirage.

She has described the role of First Lady as "much more than a 24-hour job than anyone would guess" and says of her predecessors: "Now that I realize what they've had to put up with, I have new respect and admiration for every one of them."  - Article From White House Archives Circa 2008

The Congressional Evolution of the United States of America

Presidents of the United States of America

Capitals of the United Colonies and States of America

Book a primary source exhibit and a professional speaker for your next event by contacting Historic.us today. Our Clients include many Fortune 500 companies, associations, non-profits, colleges, universities, national conventions, PR and advertising agencies. As a leading national exhibitor of primary sources, many of our clients have benefited from our historic displays that are designed to entertain and educate your target audience. Contact us to learn how you can join our "roster" of satisfied clientele today!

Primary Source exhibits are available for display in your community. The costs range from $1,000 to $35,000 depending on length of time on loan and the rarity of artifacts chosen.

No Taxation Without Representation

US Bill of Rights

*Republican Party - - is a defunct political party organized by Thomas Jefferson and James Madison in 1791. The Party went out of existence over the schism between John Quincy Adams and Andrew Jackson (both Republican candidates) over the Presidential election of 1824. Today, for the sake of expediency, political scientists incorrectly refer to it as the Democratic-Republican Party. Party members throughout its existence never utilized the name “Democratic-Republican.”

*** President of the Confederate States of America